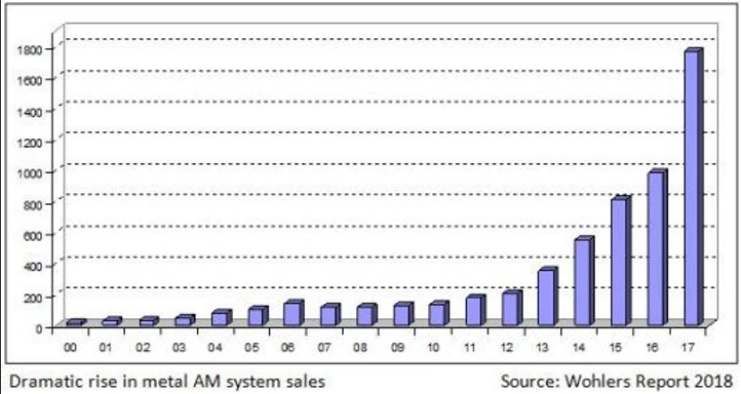 The additive manufacturing industry is still growing at a rapid pace, and what’s especially expanding is metal. In 2016, an estimated 983 metal additive manufacturing systems were sold. In 2017, that number shot up 80% to 1,768. That’s by far the greatest single-year increase since 2000. It isn’t just the numbers that are going up, either; the Wohlers Report 2018 also found that process monitoring and quality assurance measures are improving, though more work remains to be done.

These numbers show that manufacturers around the world are discovering the benefits of additive manufacturing. Supply is meeting demand, as well – in 2017, 135 companies around the world produced and sold industrial additive manufacturing systems, defined as machines that sell for more than $5,000, up from 97 companies in 2016. New 3D printer manufacturers are entering the market at a rapid rate, and they’re bringing new and valuable things with them, such as open material systems, faster print speeds, and lower prices, allowing metal AM to become more and more accessible.